Last month, Architectural Record wrote briefly about the SandRidge Energy Commons project in Oklahoma City, the new corporate headquarters of an oil and natural gas company, in its move downtown, is creating a program not commonly sought – extending and enhancing the public realm by weaving their buildings and landscapes into the urban fabric.

This month, our very own Michael Skowlund gave a talk and tour to designers in Oklahoma about the project, which is led by Rogers Marvel Architects. I’ve pretty much plagiarized his PechaKucha for this week’s post, so thank you Mike!

The urban design plan for the SandRidge Energy Commons investigates what public infrastructure, amenities, and initiatives are currently in place. The plan focuses on re-using existing buildings and developing a new architectural and open space program in a smart way to generate green links that address both company needs and civic engagement. Graphically, Rogers Marvel expresses this distinction as the difference between a corporate icon and a civic place: 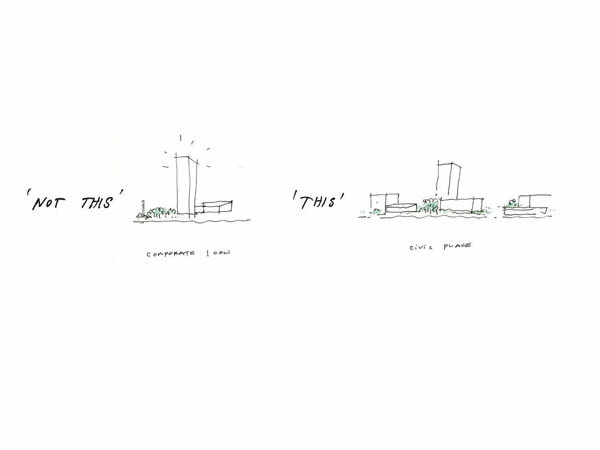 A leading goal of the project is to design outdoor space that can be used more often, by more people, throughout more seasons of the year. Oklahoma City weather is tough, with excessive wind and high/low extremes in the summer and winter (and as we all know, those extremes are likely to get more intense). A significant portion of the landscape strategy focuses on mitigating wind and sun exposure through strategic planting and architectural elements. Extensive studies of the site, including this wind tunnel model, analyzed wind loads and direction. 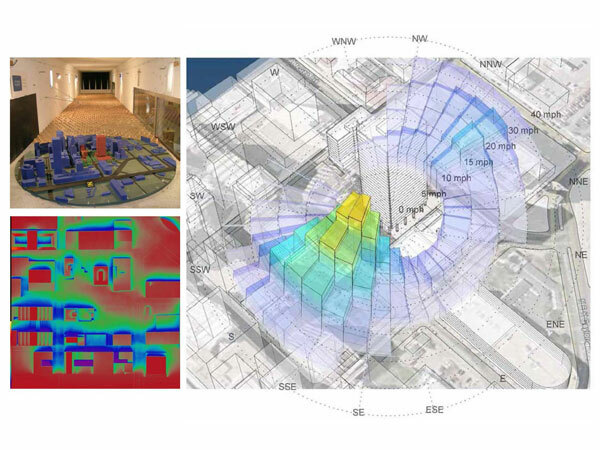 As a constructed landscape in an urban environment, the SandRidge landscape is not intended to precisely replicate a natural environment, but rather to allow regional materials, native landscape typologies, and topography to influence and inspire the design process. The result is a cultural urban landscape that incorporates a contemporary design aesthetic while retaining and evoking a distinct regional identity. Graphically, the design team explains it this way: 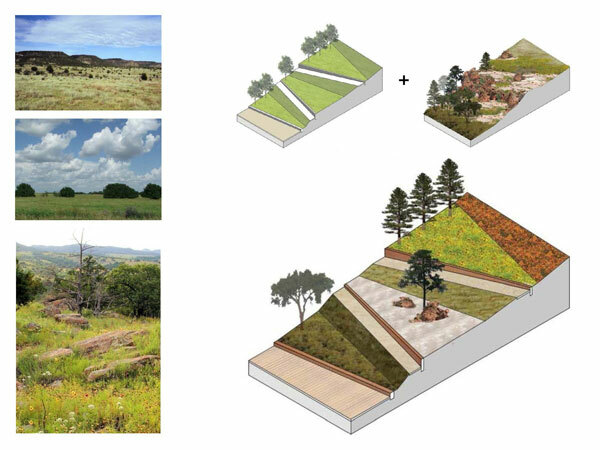 Oblique angles and forms are a significant design element throughout this project in both the landscape and architecture. This design language evolved in part from a study on abstracting the molecular structure of methane, a gas that plays an important part in SandRidge’s industry. 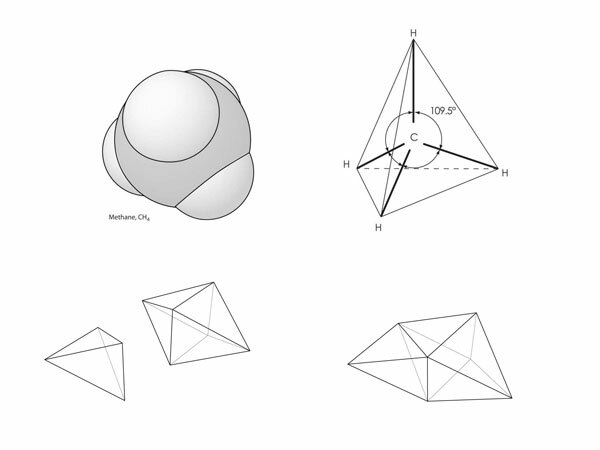 You can begin to see the forms taking shape in the aerial view of the parking garage below. One of the design challenges for this site was determining how to design an entrance to an underground parking area in a way that doesn’t make you feel like you’re a coal miner heading to work. No one likes to drive down into a dark hole. Here these concepts are expressed by peeling back, folding down, and opening up the entry through clearly defined oblique planes in the landscape. A wide entrance coupled with the mature pine stand planted on the descending plane eases the experience of going underground. In a sense, the landscape and ground plane are coming with you as you descend. 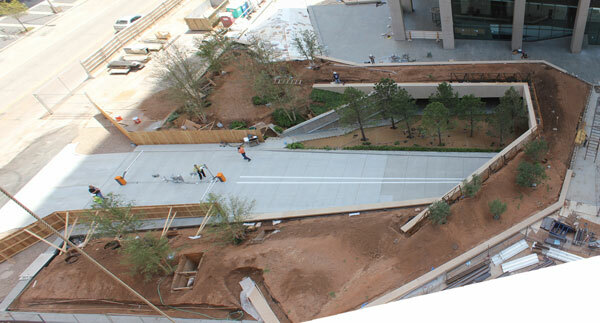 We’ll be posting more about this exciting project as it progresses!